Kemena-Jelalong river: Ethno-linguistic view of an ecosystem in transformation

The profound changes underway in the landscape mosaic of the Kemena-Jelalong watershed are representative of the fast-paced, resource-intensive development trajectory of Sarawak. The upper watershed areas (ulu) are being opened up to new forces of change, as logging roads are constructed to facilitate the movement of natural resources. Improved access means that industrial plantations (acacia, oilpalm) and new forms of market-oriented smallholder agricultural production (oilpalm, pepper) are securing a place in the landscape as well. The rapid pace of change has implications for both the natural and human diversity of these landscapes. Although transportation and communications have typically been difficult, the area has by no means been isolated from lowland society. River systems have traditionally been the social and economic lifeline of ulu communities, and provide a useful framework for analyzing both human-nature and human-human relations.  The high degree of interaction between diverse groups in Borneo has typically created an ever more complex mosaic of cultures and languages. Contact between language speakers can result in both more and less diversity, depending upon the nature of interactions. Languages influenced by the speech of neighbors in different areas may diverge to create new dialects that may eventually become mutually unintelligible. At the same time, intensive interactions among many groups often creates a shared layer of language, including vocabulary and grammar, which is often based on shared knowledge systems and livelihood strategies. In the upper Kemena-Jelalong, the arrival of Iban immigrants during the middle of the previous century introduced a new lingua franca to the local ulu community.  Upstream from our departure point of Tubau, the area is populated by Iban, Kayan, and Penan, living in longhouses along the rivers (and one Vaii Segan village slightly downstream). The town of Tubau has for years been the central commercial point of exchange for the watershed, but this seems to be changing as economic development in the upper watershed moves forward. The following preliminary observations from our field trip help set the stage for developing hypotheses regarding the current state and future directions of ethno-linguistic diversity: Multilingualism as the norm  Our observations suggested that multilingualism is the norm among the people of the area. Many of the people, particularly orang ulu and Chinese, comfortably used as many as four languages. Some Iban living in mixed longhouses were competent in Penan. There are several lingua franca in the region as well. Among the communities of the upper area, Iban is the most common language of communication across ethnic groups. Use of Malay was mostly limited to situations when downstream Chinese were present. Communication between Penan and Kayan was not observed outside of Tubau, where Iban and Malay were dominant.  The capacity for code-switching is certainly a common feature of the socio-linguistic environment, as people often moved comfortably between Iban, Malay, Kayan and Penan, not to mention some Chinese. I even communicated with one Kayan community leader in Chinese – I spoke Hokkien and he Teochiu – and then later we switched to English. It can be assumed that there is an abundance of resources for communication among these diverse groups. The typical Sarawak river-community is characterized by a dense network of social relations, including trade, marriage and administration. The first impression from our trip was that this river system as well has been the backbone of multi-layered social networks that are facilitated by capacity for code-switching. Have these communication networks created social capital at the river-system level? 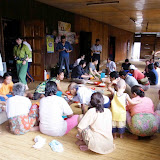 Longhouse demographics  Two demographic issues were notable in the upper Kemena-Jelalong. First, in the upper watershed there are at least two mixed Iban-Penan longhouses. While it is not uncommon to find individuals of different ethnicity in a longhouse, it is a relatively recent phenomenon that significant portions of the longhouse residents are from different groups. First indications are that Iban residence in an orang ulu longhouse results in Iban emerging as the common language, and strong influence of Iban residents on decision making. Second, there was a marked absence of adolescents and young couples. This seems to be the result of education and employment opportunities outside of the longhouse. People living outside of the longhouse will ostensibly be exposed to Malay, English and perhaps Chinese. They will also have less exposure to traditional forms of communication and interaction, through which knowledge and values are transmitted. However, given the relatively high awareness of cultural values and the presence of local language media, it is not clear what choices the next generations will make in terms of language use. [youtube]http://youtube.com/watch?v=YAYt4UVoKqA[/youtube]
At the longhouse in Tubau
Information and livelihoods  Economic transformation, when driven by market forces, makes access to information a key concern for local people. Decisions about cropping, off-farm employment and other economic opportunities all require information. The role of the radio in transmitting information is interesting in this region, as radio programs in Malay, Iban, and Kayan (and Bidayuh as well) are broadcast on a daily basis. In both the longhouses and Tubao, we observed people listening attentively to the radio; Iban language programmes seemed popular among both Iban and non-Iban people. Newspapers were also available in Tubao; I saw Chinese and Malay-language papers, including the Utusan Borneo which has a daily Iban language section as well. Peoples’ decision making is based on access to different sources of information, and one key strategy for managing livelihood transitions is managing information. 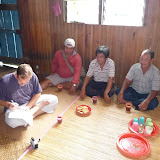 Tubau ghost-town: From river-economy to road-economy?  One can imagine that the town of Tubau at one time played an important role in the lives of the upper Kemena-Jelalong people. The impression now is that it is becoming something of a ghost town. The Teochiu traders present seemed to run a slow business, and arrivals at the jetty were not noteworthy. If the extension of the road network, through logging roads, is reducing the relevance of Tubau, what, if anything, will take the place of Tubau as a central node of communications? Where will exchanges happen, how will negotiations happen? Reflection  It seems that the transitions going on in the watershed are having a large impact on the basic network of communication in the watershed. The current situation is one of high diversity, high multilingualism, and perhaps high levels of trust and cooperation (if the communication networks have created social capital, or perhaps the causal relationship is the reverse?). At the same time, the concurrent appearance of multi-ethnic longhouses composed of primarily older people and young children creates complex forces of change within the individuals’ language repertoire. Key to understanding these issues is a deeper grasp of the fundamental changes underway in the river-system. If there is a reorientation of economic activity from the river to newer roads, there should be concurrent impacts on the structure and processes of interaction that make up the social fabric of this area. In any case, there is an urgent need to begin to articulate a socio-economic history of the Kemena-Jelalong river, setting the baseline for assessing the types of changes under way to underpin the various facets of research to be done in the project. Keywords for developing a detailed research framework: multilingualism, code-switching, social networks, demographic change, resource governance