biomasssociety.org > Research Outcome > Events and Activities > ”Some aspects of forestry in Sarawak in the 70s” [Dr. Lee Hua Seng]

”Some aspects of forestry in Sarawak in the 70s” （A seminar by Dr. Lee Hua Seng） 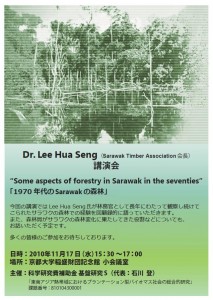 In 1970, when he finished his study of forestry in The Australian National University, Dr. Lee Hua Seng got a position in the Sarawak Forest Department and was immediately transferred to a logging camp located in deep inland of Bintulu District. According to Dr. Lee, there was no paperwork on job contract back in those days. This rash job assignment tells us well that it was an urgent matter in Sarawak at that time to develop forestry in accordance with the increase of global demand for the tropical lumber.  As a Forest Inventory Officer, among eight districts in Sarawak, Dr. Lee was in charge of Anap area of Bintulu district and Kakus area of Tatau district. As those are the principal research spots of our project, we asked Dr. Lee to come and share his story regarding the forestry policy in Sarawak in 1970s and regional situations of Bintulu area at that time. In 1970s, local economy was heavily relied on forest resources and both logging and lumber-producing played a crucial role in lumbering industry. For that matter, the productions of block board, plywood, wood furniture, wood plate, wooden dowel (small woodblock used to joint lumbers), laminated board, wood chips, jelutong, and nipah products (for the production of sugar or alcohol) were in bloom in Sarawak. There were other forest products such as illipe nuts of engkabang trees, rattan, dammar resin, and edible bird’s nest as well. 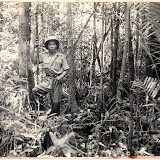 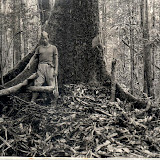 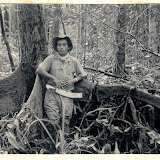 Allegedly at the beginning of 1970s, Sarawak Forest Department and Food and Agriculture Organization conducted a joint research on forest resources of inland area and plans were built for the development of lumber industry in Sarawak based on the result of the research.  Dr. Lee illustrated the backgrounds and situations at the time in Sarawak first, then gave us with the detailed descriptions of the ups and downs of the local lumbering industries in 1970s, the climate of timber import business by the Japanese, the foundation of Sarawak Timber Industry Development Cooperation, the influence of the oil crisis, and the timber industry trend in Sabah.  Dr. Lee shared us with interesting episodes, based on his personal experience as the member of the Forest Department: a dispute of shifting cultivation by indigenous people, a problem of labor shortage in the Sarawak Forest Department in accordance with the rapid growth in timber industry in Sarawak in the late 1970s.  In addition to the business climate of timber industry inland area, we asked Dr. Lee to tell us the logging activities in the peat land in lowland areas and its historical backgrounds. The forest in peat land areas were abundant in full of vegetation and according to Dr. Lee, commercial logging had begun in late of 1940s in the coastal area mainly because of its easy access and rich vegetation of high-priced trees such as meranti and ramin.  Dr. Lee’s lecture was quite intriguing as it took an overall view of global market, at the same time; his story was full of hands-on experience and details which included a collection of his personal photos. 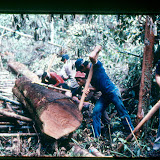 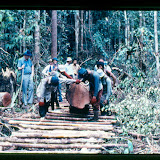 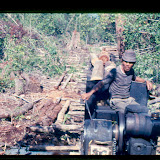 For 40years Dr. Lee has been involved in the forestry in Sarawak. During those years he had been played the role of gateway in both Sarawak Forest Department and Sarawak Timber Association and committed to accept Japanese researchers. Dr. Lee has always been supportive to us and he himself had never stopped pursing his academic life and in 1997, he completed his doctorates in Japan. Because of his knowledge and experience as an academic, we found Dr. Lee‘s lecture was quite inspiring and convincing and full of suggestions. (written by Ryoji Soda) 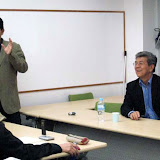