biomasssociety.org > Research Outcome > Report of Research > The Key to the Bird Nest Business Lies in Bird House [Haruka Suzuki]
The Key to the Bird Nest Business Lies in Bird House Haruka Suzuki（Center for On-site Education and Research, Integrated Area Studies Unit, Center for the Promotion of Interdisciplinary Education and Research, Kyoto University） The key to the bird nest business lies in houses  The bird nest business is flourishing in urban areas along the Sarawak coast. Success in this business, which involves gathering the nests of cave swiftlets, a type of swiftlet, for sale (see Photograph 1), depends on being able to gather as many large nests as possible. To that end, people build structures that provide an environment that facilitates nest-building by the birds. Throughout this paper, I will refer to these structures as “bird house.” Unlike long-established methods for gathering bird nests built in caves, use of bird house depends on having the birds use the houses to build their nests. People employ a variety of creative measures to entice them to do so. It is no exaggeration to say that whether the bird nest business is successful—whether numerous swiftlet can be attracted to the bird house and enticed to make large numbers of high-quality nests—depends on these measures.  In this paper, I will report on bird house (see Photograph 2) being used to conduct research in this project into the ecology of cave swiftlet. My objective is to decipher the creative measures adopted to attract swiftlet based on the placement, building methods, interior space, and interior environment of these bird houses. I conducted a site survey from February 14 to 20, 2013. The bird houses in question have been built along the road from Bintulu to Sebauh, about half an hour by car. All were recently built structures that had been completed in 2012. According to Mr. T, who manages bird house in the area, the swiftlet will come to the houses gradually in the evening. The effort is off to a good start.  It is primarily Mr. T, his wife Mrs. D, his son B, and his daughter L who are responsible for building and managing the bird house. The actual construction of the house is carried out by several residents of Asap, where Mr. T and Mrs. D live. Asap is a region that lies about half a day inland by car from Bintulu. For his part, Mr. T’s son B lives in Kuching and operates a number of bird houses in Kuching and Bintulu. Mr. T’s daughter L lives in Bintulu, where 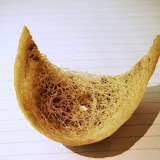 Creative measures to entice swiftlet to visit bird house   When people rent a condominium or apartment, they make an overall decision after comparing such factors as exposure to sunlight, floor plan, building age, rent, and proximity to the nearest train station with their own lifestyle. In the same way, is it not likely that swiftlet decide whether to take up residence in a house based on how well it matches their own “lifestyle” (ecology). In this section, I will examine the creative measures that people have implemented in order to entice swiftlet to use the houses along the lines of the characteristics of those houses. ①Location: Peatland on the outskirts of Bintulu. Good ventilation, good view. Good access to oil palm plantations.  Mr. B, who was overseeing the construction of the bird house, chose this location because he owns land here. The land was originally owned by a nearby Iban people, but Mr. B purchased 10 to 15 acres1 of it. In Mr. B’s view, the large number of insects, on which swiftlet feed, in the peatland and nearby palm oil plantations made this site well suited for a bird house. The bird house is surrounded by untouched peatland owned by Mr. B. Palm oil plantations can be seen nearby along the road leading to Sebauh, along with scattered bird houses. There are no buildings near this bird house, which is exposed to the wind and enjoys broad views of the surrounding area. 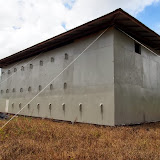 ②Construction method and layout: Wooden frame, threestory structure. Vaulted, open area at the entrance. Air holes ensure good airflow.  The most noteworthy characteristic of this bird house is its wooden construction. Most bird houses are built from concrete. It is likely that this preference reflects a belief that concrete provides an environment that closely resembles the caves in which swiftlet build their nests in the first place. However, this bird house was built using wood in an effort to keep down the cost of construction. According to a site survey conducted by the author, the cost of constructing this bird house was in fact less than the cost of constructing a concrete house2.  The exterior dimensions of this bird house (see Figure 1) are 720 (W)×1,800 (D) × 705 (H) centimeters. There are 24 air holes each on the eastern and western sides of the structure, to which PVC tubes are attached. There is an entrance for the swiftlet on the top of the northern side of the house. This entrance measures 60 (H) × 90 (W) centimeters. After comparing the size of this house’s entrance with other bird house, I found that this house has a somewhat large entrance. There are entrances to provide access for human workers to the small rooms on the south and east sides of the house. There is a control room containing audio equipment on the southern side of the house. 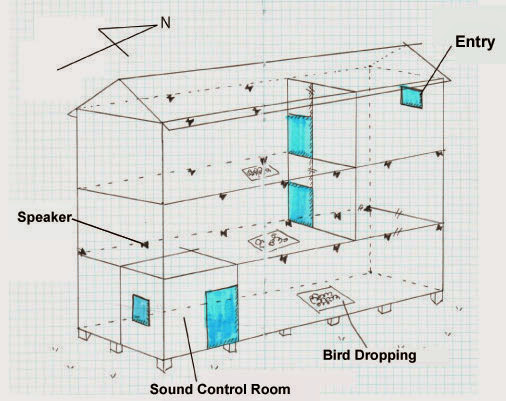 Figure １: Illustration of the interior of a bird house (drawn by the author based on measurements taken at the site)