Our member succeeded to capture Bay Cat on Video 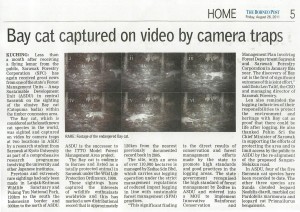 The Borneo Post, Friday, August 26, 2011
（The article says:）
Kuching:
Less than a month after receiving a flying lemur from the public, Sarawak Forestry Corporation (SFC) has again received great news from one of the state’s Forest Management Units – Anap Sustainable Development Unit (ASDU) in central Sarawak on the sighting of the elusive Bay cat (Catopuma badia) within the timber concession area.
The Bay cat, which is considered as the least known cat species in the world, was sighted and captured on video by camera traps at two locations in ASDU by a research student from Sarawak at Kyoto University as part of a comprehensive research programme involving the university and other Japanese institutes. Previous and extremely rare sightings had only been made in Lanjak-Entimau Wildlife Sanctuary and Pulong Tau National Park, 120km to the south the Indonesian border and 300km to the north of ASDU.
ASDU is the successor to the ITTO Model Forest Management Area project. The Bay cat is endemic to Borneo and listed as a totally protected animal in Sarawak under the Wild Life Protection Ordinance, 1998. These sightings have captured the interests of wildlife enthusiasts worldwide and this has marked a new distributional record that is approximately 120km from the nearest previously documented record back in 2005. The site, with an area of over 110,000 hectares is managed by Zedtee Sdn Bhd, which carries out logging operation under the strict management regulations of reduced impact logging in line with sustainable forest management (SFM) practices. “This significant finding is the direct results of conservation and forest management efforts made by the state to promote high standards and good practices in the logging areas. The state government recognised the high standard of forest management by Zedtee in ASDU and entered into a MOU to implement Innovative Rainforest Conservation and Management Plan involving Forest Department Sarawak and Sarawak Forestry Corporation in January this year. The discovery of Bay cat is the first of significant outcomes of this joint effort,” said Datu Len Talif, the CEO and managing director of Sarawak Forestry. Len also reminded the logging industries of their responsibilities to protect the environment and heritage with Bay cat as proof that there could be life after logging. He also thanked Pehin Sri the Chief Minister of Sarawak in supporting the efforts of protecting the area and to limit access by the public to ASDU by the re-alignment of the proposed Sangan- Melukun road. In ASDU, four of the five Bornean cat species have been recorded to date. The other three species are Sunda clouded leopard Neofelis diardi, marbled cat Pardofelis marmorata and leopard cat Prionailurus bengalensis