Yucho Sadamichi (The National Institute of Advanced Industrial Science and Technology)  I have been working on environmental assessment, called Life Cycle Assessment (LCA), and in particular on the analysis of greenhouse gas (GHG) emission reductions resulting from the use of biofuels. LCA is based on a cradle-to-grave approach, covering land preparation, cultivation, transportation, biomass-to-energy conversion, distribution and consumption in the case of biofuels.  In the past couple of years, I have visited factories and plantations in Southeast Asia to conduct LCA analyses for enterprises and governments, mainly focusing on how to reduce GHG emissions induced by their activities. This year I joined this project and visited Sarawak to evaluate the environmental impact resulting from acacia and oil palm plantations. The following is my brief report from the summer investigation at Sarawak in 2010. 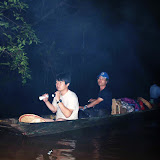 At the beginning of our field trip, we visited villages where the local residents live deep in the forest of Sarawak. On the way to the forest, we discovered a few longhouses along the river. We stayed at some of them for a few days to conduct our researches. Since it was my first time to visit a longhouse in Sarawak, I was deeply impressed by the people living there in terms of their economical and functional lives, and found the life and culture of the longhouse in Sarawak may share some common culture with northern Thailand where I had been working previously.  In this project, my interest is how acacia and oil palm plantations impact on the environment and society of local people and communities. For example, global warming is frequently referred to as a symbol of the environmental issues in Japan, but the question is not only the amount of carbon dioxide, but also how it impacts on our lives. The conversation with the residents of the longhouse brought me to understand how closely-correlated the plantations and people’s lives are and its complexity and diversity.  Once a forest is converted into an oil palm plantation, it would affect the regional atmosphere, water, soil and plants and animals. If the quality of water in the river was deteriorated, the number of edible fish might decrease and it might damage fishery. The increased number of wild pigs who eat oil palm might decrease other plants and animals. All of these kinds of events might affect some change in the local communities. The dispute between villagers and plantation companies over the ownership of the land is one of the typical issues that occur around their plantations. Other impacts include many villagers giving up farming due to new works in the plantation to earn more money or others opening oil palm plantations on their own. Oil palms are sometimes planted in peat land which is said to absorb carbon dioxide. When the land is converted into plantation: 1. Anticipated carbon sinks would be lost. 2. Some of the stored carbon in the soil would be released into the air in the form of carbon dioxide.  All of these events could be directly connected to the global warming issue. I am planning to quantify the various impacts, both negative and positive, of oil palm plantations on human society, hoping it can provide us with clues on how to improve the situation. 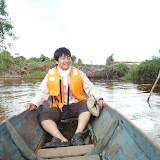 During our stay, we visited timber companies and acacia plantation companies. I was so impressed there by the immensity of forests. Although we imagine trees in the mountain as forest, here in Sarawak many trees were grouped together in a vast area at just around 100 m above sea level. Timber companies cut trees in accordance with the government guideline. The sizes of the trees, species, etc. are now strictly recorded in detail. Those logged trees are gathered and carried by skidders. The timber is processed and shipped overseas to countries such as Japan. I plan to start with an estimation of greenhouse gas emissions of these entire activities including logging, transporting, and use in Japan. 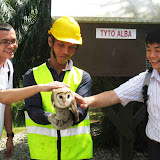 Although our two-week investigation in Sarawak cannot be summarized in this short report, one thing I would like to add concerns the diverse members in this project who engage in a variety of study fields. Some focus on ethnic groups, some river water, some soils and some animals. Through discussions and activities with those members, I would like to take this opportunity to obtain more ideas for my study to contribute to this project.