Report on the Preliminary Research in Sarawak, Malaysia

Motoko Fujita（CSEAS, Kyoto University）  Among the information I collected during this field trip, I discovered two facts about swiftlets that were particularly fascinating. One concerns the ecology of the bird and the other concerns human interaction with swiftlets that I witnessed during my stay. Two species of swiftlet produce edible birds’ nests, which is known as Chinese delicacy: the Edible-nest Swiftlet (Aerodramus fuciphagus hereinafter referred as to A.fuciphagus) and the Black-nest Swiftlet （Aerodramus maximus, hereinafter referred as to A.maximus）In general, A.fuciphagus lives close to coastlines and dwells in bird farm houses*, in which people try to attract birds to make nests. A.maximus is more likely to be seen in mountain caves and seldom builds nests in bird farm houses. Indeed, I heard that people had wasted money building bird farm houses around Bau where A.maximus is abundant; the birds failed to build their nests in their bird farm houses. 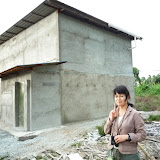 A.fuciphagus seems to have a number of subspecies. One of them live in bird farm houses, while others live in caves. The subspecies of A.fuciphagus that has been increasing in number in Sarawak was brought in from Java. Some say they originally migrated from Indonesia (Kalimantan) over to Malaysia (Sarawak), when a large fire broke out and burned down the bird farm houses in Kalimantan. It is true that the Indonesian part of the island of Borneo is renowned for forest fires but this story requires careful scrutiny. 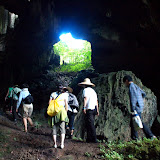 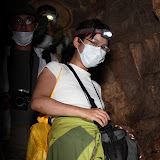 Assuming that it is this subspecies that dwells in the ever-increasing bird farm houses in Sarawak, what makes them dominant in this area? Even if it was humans who brought them into this area at an early stage, this subspecies could not have prevailed if they lack the ability to adapt to a new environment. Most bird farm houses are located in city areas, but where do the swiftlets find food and on what do they feed? Do they find their food in the city or do they need to commute to a nearby / distant feeding ground? Do the urban swiftlets feed on something different from other swiftlets inhabiting food-abundant areas? What type of feeding sites do they have in urban areas? Why does A.maximus shy away from bird farm houses? 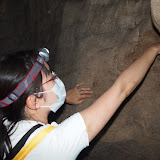 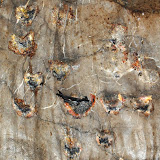 Another point I’d like to focus on is the comparison with the swiftlets in Indonesia. The bird’s behavior which I witnessed in Sumatra seemed to be somewhat against that in Sarawak. For example, in a town called Batu Raja in Sumatera Selatan located at the foot of the Barisan Range, I saw bird farm houses even though the town is about 100km from a coastal area or peat land. However, I have not yet identified the species in the bird farm houses in this town. Although the credibility is questionable, some Internet-based information indicates A.maximus also adapts to life in bird farm houses in Indonesia. If there is an ethological difference of birds living in different places, identifying the reasons for such difference would be significant.  The uniqueness of the study on swiftlets is that the ecological interest in the species often explains human behavior. For centuries, swiftlets have taken shelter in caves in this area and only a few local people hold the rights to collect the birds’ nests. The rights have been handed down for generations according to the local customs (adat) and gradually have taken on the nature of something akin to real estate. The human behavior associated with these rights is also very intriguing. The latest example is the advent of bird farm houses in Sarawak. People have started to build bird farm houses or remodel houses into bird farm houses as if they are competing with each other with the hope of hitting the jackpot. An extreme example is an entire hotel was converted into a bird farm house in Sarawak. Clearly swiftlets seem to be better hotel guests than humans. Certainly, if things go well, a bird farm house could make as much as two million yen profit a month. Not surprisingly, the state government of Sarawak sees a bright future for the business and advocates its support. Are humans cashing in on the birds or are the birds taking advantage of us?  The bird nest business looks promising as it has the large population of the Chinese and ethnic Chinese as potential customers. However, each industry has its light and shadow. Ecologically speaking, swiftlets feed on various flying insects hence they play the role of biological control as predators. But from another viewpoint, the fast-growing number of swiftlets may cause a severe competition with other native species or subspecies. It is necessary for bird house owners to pay extra attention to the human health issue as well; they let the birds to build their nests in enclosed spaces, generating a massive amount of droppings which are affected by pathogens. The relationship between the human and swiftlets will continue into the foreseeable future without a doubt. I would like to continue my study on this relationship with interest. *:Bird farm houses are grower barns made for swiftlets to lure them and collect their edible nests. There is a variation in the types of the bird farm houses from a house of one to three-story or commercial longhouses. In some cases old hotels are turned into bird farm houses in urban areas.