biomasssociety.org > Research Outcome > Report of Research > A report on joint research in Sarawak: the possibilities for study of ethnic Chinese by researchers and scholars from different fields [Tetsu Ichikawa]

A report on joint research in Sarawak: the possibilities for study of ethnic Chinese by researchers and scholars from different fields

Tetsu Ichikawa（College of Tourism, Rikkyo University）  My study in Sarawak mainly focuses on the ethnic Chinese groups in that area. I have conducted the research, paying attention to the interactions between the ethnic Chinese and indigenous people in Sarawak. The interactions include business, mixed marriage, adoption and so forth. From the perspective of research experience in Sarawak, I would like to elucidate some of the characteristics of the research, performed by a team of researchers that integrate the humanities and science.  The major benefit for me to take part in this joint research was the possibilities it created for working together with other researchers from different study fields. Most social science researchers, including myself, conduct field work on their own. Solo research is invaluable as it affords information and experience that researchers cannot obtain in other ways. It is rare in the field of social science studies for a large number of staff to conduct research together. Even when it is necessary to work as a large team, it is usually limited to work in a capital city or in urban settings to take advantage of the scale. Researchers usually take an independent approach to conduct more in-depth research. As such, the style of this joint research – working together constantly with a group of about 10 researchers, both Arts and Science – gave me an opportunity that I had never experienced before. Before joining this project, I felt some doubt but with the help of Dr. Ishikawa and Dr. Soda, as well as the other members, I gained invaluable experience.  Looking back at the joint research from the perspective of the ethnic Chinese study, the great merit of this team research activity is that it lowered the suspicions of the local people toward the researchers. It may sound like a cliché but it is an actual problem that in Sarawak many ethnic Chinese view researchers with a great degree of suspicion. As a result, in many cases an announced visit for research is not welcomed. To avoid this, many researchers rely on local Chinese acquaintances to make arrangements for research at the local level. In Sarawak as well as the whole of Malaysia, ethnic Chinese tend to conduct their business and live in urban areas and this also makes it difficult to conduct hands-on research at the local level in Sarawak.  At the early stage of this joint research, I was worried about creating suspicion among the ethnic Chinese by visiting their residential area with a comparatively-large research team of 10 people. Fortunately, my worries turned out to be groundless. Truth be known, I witnessed friendlier interactions between the researchers and local ethnic Chinese than when conducting solo researches. I guess when they see a team of Japanese people moving around their residential area in groups, curiosity may overcome suspicion. During this research trip, I obtained information that I could not have gathered if I had worked alone.  Aside from the theme of the project, this experience of working with other researchers as a team provided me with a good opportunity to examine the merit of group research.  The following presents various findings and the possibilities for future researches. 1. Interactions between ethnic Chinese and other ethnic groups  By collaborating with other researchers, I was delighted to gain further knowledge of interactions between ethnic Chinese and other ethnic groups. I visited various locations including urban areas such as Bintulu, Tatau, and Sangan, and other locations such as a logging site in Anap Muput, an Iban longhouse and a cave in Kakus in which swiftlets build their edible nests. I worked with researchers who had been studying indigenous ethnic groups such as Malays, Iban or Punan and this opportunity gave me a chance to see the patterns of interactions between ethnic Chinese and other groups and their perspectives toward the ethnic Chinese.  During this joint research I was unable to conduct self-observation of interactions between ethnic Chinese and other groups or to perform any hearing investigations to collect comprehensive data. However, I found it invaluable to have useful information and advice for future research in this area.  The interactions between ethnic Chinese and other groups in business establishments, companies and schools in urban areas is something that can be seen every day not only in Sarawak, but across the whole of Malaysia. In Malaysia, there is no dissociation among each of the ethnic groups in terms of public affairs or in business. In everyday life, however, each group differs markedly from the next. This also holds true for the researchers who have been studying the ethnic groups in Malaysia. There is not much chance for us to know about any ethnic groups other than the group of our research subject. This is a common difficulty that all cultural and social science researchers confront. Accumulating detailed and in-depth knowledge of other ethnic groups is not an easy task for researchers who study multiracial society. To understand Malaysian society or narrow it down to Sarawak society, it is necessary to carry out a series of researches and studies on certain ethnic groups but this is insufficient without understanding the social positions or their correlations in the communities. This trip made me realize how effective it is to work with other ethnic group specialists. To overcome various research difficulties, I found it useful to cooperate with other researchers in the form of joint research rather than cooperative study. 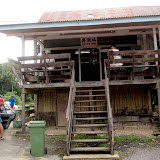 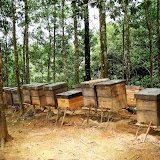 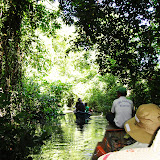 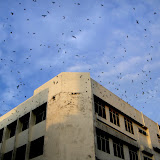 4. Over the Sarawak boundary  Before launching the study on Malaysia, I had been conducting fieldwork in Papua New Guinea. Today, a variety of Chinese immigrants from mainland China, Indonesia, or other East and Southeast Asian countries flow into Papua New Guinea. Of all others, the number of Chinese from Malaysia was the standout. Since then, I’ve had an interest in their transnational activities. During this trip I came to realize that transnational flows of goods as well as people would give me a clue to understanding the transborder activities of ethnic Chinese in Malaysia.  A typical case of transnational flow of goods that Malaysian Chinese mainly control is edible birds’ nests. It is a well-known fact that swallow nests are highly prized in Chinese cooking. Not many areas in China can produce birds’ nests so the majority of them are gathered from outside of China. I am particularly interested in birds’ nests which have the role of binding together Sarawak and the societies beyond its boundary. I had heard about the birds’ nests in a shop in an urban area but had never pursued the topic in depth. I had little knowledge of where those nests come from or how the nests are distributed to the market. On this trip, I worked together with specialists of other fields on the research of birds’ nests. During this research I ascertained the direction in which study on the establishment of relationship-building between Chinese and other ethnic groups should proceed. While we were at Kakus, we visited a cave where local Punal Kakus collect the birds’ nests. We obtained information on how they own and use the cave in which swallows build their nests. We also understood the role of the Chinese, how they sustain the cave in order to enable continuous harvesting of birds’ nests. Practically no ethnographic studies on the topic of the harvesting, distribution, and consumption of birds’ nests in Southeast Asia based on a field study have been conducted. I believe the birds’ nests could bring a fresh angle to the study when focusing on the relation between Sarawak and the societies beyond its border because this commodity plays a part in correlating more than one ethnic group and local communities in the process of its gathering, distribution and consumption.  I have concentrated on four topics here but I believe that future research could reveal many more angles. Researchers from different study fields working together in watershed areas of a certain geographical range will make a significant contribution to the study of Sarawak Chinese communities and Chinese society in Malaysia as well.  Most antecedent researches dealing with Chinese society in Malaysia focus on peninsula areas and few focus on Sabah or Sarawak. However, there are some interesting study examples on ethnic Chinese in East Malaysia including the classic work of T’ien Ju-Kang, and historical monographs by Daniel Chew or Danny Wong. In the course of the Malaysia Studies, local ethnic Chinese is one of the popular research areas.  However, not many of them focus on the ethnic Chinese societies in Sabah or Sarawak, and how they interact with other ethnic communities. In cities like Kuching or Sibu, it is evident that many Chinese live inside the Chinese communities. Sarawak, however, has a geographically and historically different background and its ethnic composition is also different from that of the peninsula area. I believe the study of Sarawak Chinese, and their process of interactions with other ethnic groups, could contribute not only to the Sarawak area studies, but to the Malaysian studies as well. This joint research has provided me with an opportunity to re-examine the potential of the study on ethnic Chinese societies in East Malaysia.