biomasssociety.org > Research Outcome > Report of Research > Ground-dwelling Mammals and Birds Recorded by Camera Traps in Logged-over Forest in Anap Sustainable Development Unit, Sarawak, Malaysia [Hiromitsu Samejima, Jason Hon]
Ground-dwelling Mammals and Birds Recorded by Camera Traps in Logged-over Forest in Anap Sustainable Development Unit, Sarawak, Malaysia Hiromitsu Samejima（Center for Southeast Asian Studies, Kyoto University） Jason Hon（Graduate School of Global Environmental Studies, Kyoto University / WWF Malaysia）1 Introduction  The tropical rainforest of Borneo is very rich in biodiversity. However, most of the remaining forests are being managed for logging by private companies. In line with the current advocacy for sustainability, the concept of sustainable forest management (SFM) can become an essential scheme to ensure that forestry practices are conducted in an acceptable manner that considers biodiversity conservation while maintaining economic sustainability. However, the performance of SFM practices and their impacts on biodiversity conservation are not well verified. From a corporate perspective, the benefits arising from SFM practices have not been well documented, and therefore, have not been utilized by companies for marketing purposes or to seek financing assistance for the additional costs incurred for the implementation of SFM.  The evaluation of the effect of SFM practices on biodiversity has not been conducted in Sarawak, a Malaysian state in Borneo. We investigated the species richness of ground-dwelling species, comprising middle- to largesized mammals and birds, in a logging concession in central Sarawak under a management unit called the Anap Sustainable Development Unit (ASDU), to evaluate the management effect of SFM on biodiversity conservation. Materials and Methods Study site2  ASDU covers an area of 1,068 km2 and is located in the Tatau District in Bintulu Division, Sarawak, Malaysia. The entire area of ASDU was formerly known as the Anap- Muput Forest Management Unit (FMU), operating under Timber License T/4317. The northern part of FMU, known as the Muput-Lemai region and covering an area of 191 km2, was delineated for industrial tree plantation and was planted with the fast-growing tree species Paraserianthes falcataria from 2006. The southern part, known as Anap- Belawit Management Area and covering an area of 43 km2, was allocated for oil palm plantation. After the delineation, the management area of the Anap-Muput FMU was reduced to 835 km2. The license to operate in the Anap- Muput FMU is valid up to 2024, and Zedtee Sdn. Bhd. is the contractor for extraction in and management of FMU. Logging operations started in 1977, with the second harvest conducted in 2000. Zedtee has practiced SFM in FMU since 2008 and applies Reduced Impact Logging (RIL) methods. FMU is certified by the Malaysia Timber Certification Scheme (MTCS) under the Malaysian Principle and Criteria (MC&I) 2012.  In ASDU, JH has already conducted a study using camera traps along three streams with natural salt licks from 2010 to 2011. Several mammals and birds species were recorded as visiting the areas (Hon 2011; 2013; Hon & Shibata 2013), including the elusive Borneo bay cat (Catopuma badia ). The total sampling effort amounted to 9,270 camera-trap days. Camera-Trapping  We conducted a camera-trap study in ASDU from May 2011 to June 2013 in eight study plots (Table 1). A plot had a radius of 500 m, and random sampling points were generated within each plot. We named each plot according to the name of the coupe. One plot, C01, is located in LPF/0039, whereas the other seven plots (C04, C06, C08, C11, C12, C16, and C24) are located in T/4317. Plots C04, C16, and C24 were harvested only once, whereas C12, C11, C08, and C06 were already harvested twice, ranging back to as recent as 0–6 years. Plot C01 in LPF/0039 was harvested more than three times. The vegetation types for all plots are lowland mixed dipterocarp forest, except plot C24, which comprises Kerangas vegetation.  In each plot, eight sampling points were randomly selected using the statistical software R 2.153 We placed a camera trap at each sampling point. The elevations of the sampling points ranged from 94 to 366 m a.s.l. Plot C01 has the lowest, whereas plots C06 and C16 have the highest average elevation. At each point, we placed an automatic digital camera (Bushnell Trophy Cam) with an infrared sensor. The camera was mounted on a tree at a height of 50–100 cm above the ground. The field of view of the camera was 2–7 m2. We set the camera to record in the video mode for a duration of 10 s upon triggering. The cameras were checked every 3–5 months and the batteries and memory cards were replaced. 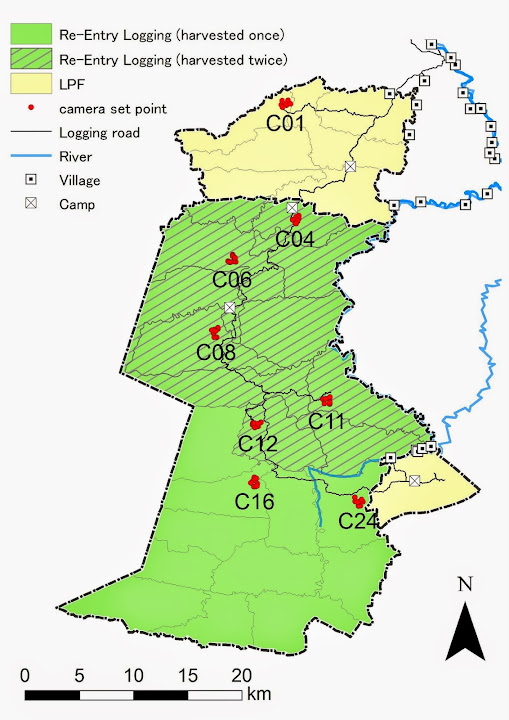 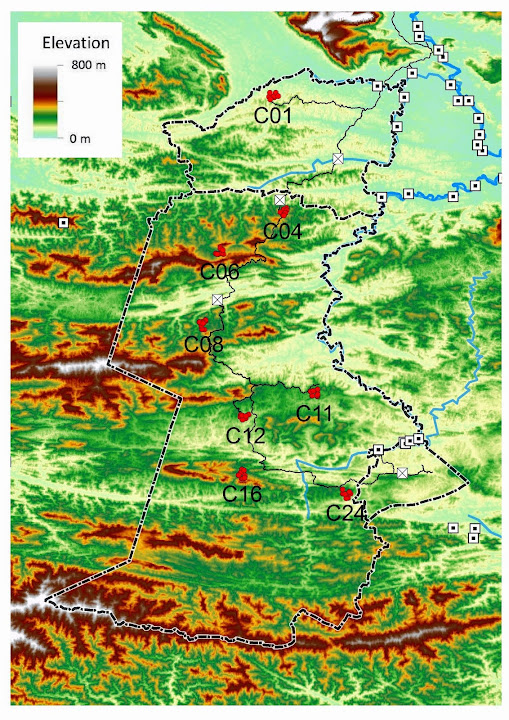 Figure1: Distribution of 8 plots under different management classes (above) and elevation classes of ASDU (below).  We analyzed all the images of the middle- and largesized mammals and birds that were recorded by the camera traps. The number of the images of the respective species at each points was also counted; the images of the same species occurring within a 30-min period were treated as one image. Identification was based on Payne et al. (2005), Myers (2009), and Phillipps and Phillipps (2009). The sampling effort was defined by the number of camera working days at each sampling point, i.e., the end or collection date minus the starting date. If a camera malfunctioned, the last day of recording was treated as the end date.  For the abundance index, we used the mean trapping rate (MTR) of each species at each plot as a proxy. The formulafor MTR is as follows: MTR = Total number of images / total camera-working days x 100 Results  Camera working days ranged from 4,442 to 6,190 in each plot, and the combined sampling effort for all plots totaled 41,467 working days. During this period, we recorded 30 middle- and large-sized mammals and four terrestrial bird species, with a combined total of 6,924 images (Table 2). The list includes many elusive and endangered species of Borneo, including those recorded in previous studies by Hon (2011) and Hon & Shibata (2013). The number of species recorded in each plot was 20–27(Fig. 2). The southern pig-tailed macaque (Macaca nemestrina , number of images, N = 1,945) was recorded the most times, followed by the bearded pig (Sus barbatus, N = 892), and the common porcupine (Hystrix brachyura, N = 744). On the other hand, the Malay weasel (Mustela nudipes, N = 1), Otter civet (Cynogale bennettii, N = 2), Smalltoothed palm civet (Arctogalidia trivirgata, N = 3), Sunda clouded leopard (Neofelis diardi, N = 2), and Crested fireback (Lophura ignita, N = 1) were recorded in less than five occasions. The sum of MTR ranged from 7.2 to 20.1 images, with the lowest recorded at C24 followed by C12 (Fig. 3). 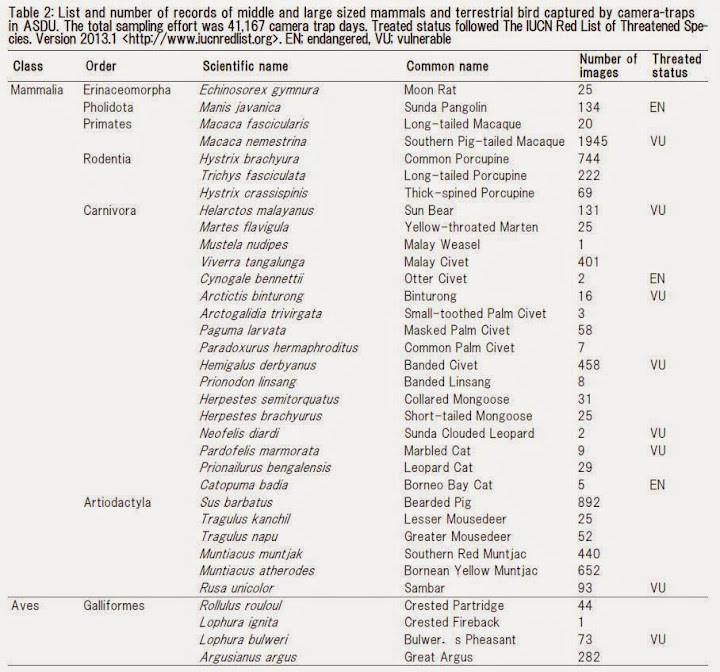 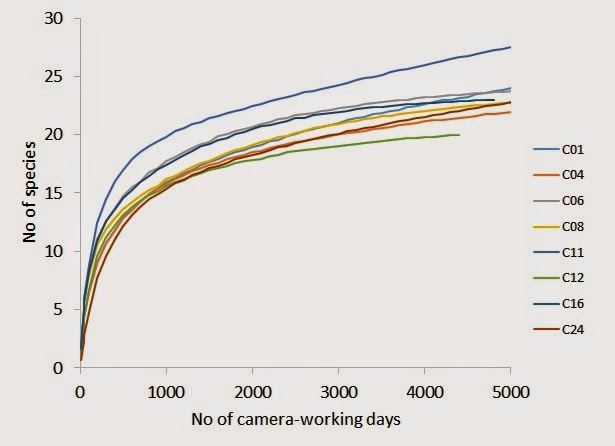 Figure2 : Species rarefaction curves with number of species plotted against sampling effort of camera trap days for all eight plots 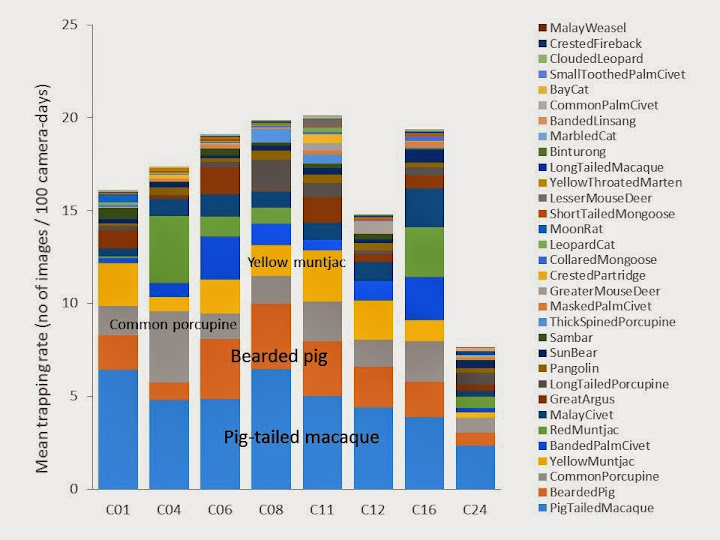 Figure3: Sum of MTR of all species in the 8 plots

Discussion  This study documented a high species richness of middle- and large-sized mammals in ASDU. We recorded most of the g round-dwel l ing or semi-ground-dwelling mammal species inhabiting in Borneo. Of the 38 known species, 30 species, representing 79%, were recorded here. Of the other eight species not recorded in this study, the following six species: Bornean orangutan (Pongo pygmaeus); Bornean ferret badger (Melogale everetti); Malay badger (Mydaus javanensis); Borneo elephant (Elephas maximus borneensis); Bornean rhinoceros (Dicerorhinus sumatrensis harrissoni); and tembadau (Bos javanicus) are not known to occur in central Sarawak (Payne et al. 2005 and Giman & Jukie 2012). Hose’s civet (Diplogale hosei) has been recorded only at higher elevations between 325 and 1,800 m a.s.l. (Samejima & Semiadi 2012). The f lat-headed cat (Prionailurus planiceps) possibly occurs here but has not yet been recorded. The f lat-headed cat is also very elusive in the other regions of Borneo (Samejima et al. 2012). There are 15 known ter restrial bird species in Borneo (Myers 2009 and Phillipps and Phillipps 2009), but our study recorded only four species. The lack of records for the other terrestrial bird species in our study may be because of the narrow range of most of the species.  The total MTR in one of the plots, C24, was markedly lower than MTRs in other plots. C24 is situated inside the Kerangas forest type, which is known for its poor soil nutrients. The conditions of soil may limit the productivity of the plants, resulting in the lower densities of faunal species that occur here.  The impact of logging on mammals and birds is not obviously severe in the Anap-Muput FMU. Although the total MTR and number of species were initially low in plot C12, which was harvested just a few months ago, the total MTRs and number of species of plots C11 and C08, which were harvested one and four years ago, differed lit tle f rom those of C04 and C16, which were harvested 20–30 years ago. We speculate that the MTR of plot C12 would increase to those of C11 or C08 in a few years. However, continuous monitoring is necessary to conf irm the population recovery.  We took note of the SFM practices employed inside the Anap-Muput FMU and var ious conservation measures that have been put in place. Among others, the FMU practices strict security by having manned gates at the access to FMU and closing all branch roads just after harvesting, which may have eliminated unnecessary and illegal hunting activities. The scale of hunting by the local communities is quite low because there is no clear demand for wild meat by outsiders and most residents hunt for subsistence only.  Many lowland forests in Borneo are at a high risk of being converted for other uses such as oil palm and industrial tree plantations. The role of the Anap-Muput FMU in particular, and ASDU in general for undertaking the important role of helping maintain regional biodiversity, is commendable. As the only certified natural forest in Sarawak, it provides a positive sign that certification and sound management practices preserve a balance between logging and wildlife conservation, and therefore, should be promoted. Acknowledgment  This study was carried out with the support of Zedtee Sdn Bhd for granting us the permission to carry research in ASDU. In particular, we would like to thank Wong Ing Yung and the staff in Anap-Muput FMU for their kind assistance during field work.  This work is approved by Forest Department of Sarawak (NCCD.907.4.4 (Jld.7) -67) and f inancially supported by Grant-in-Aid for Scientif ic Research (S) 22221010 from the Japan Society for the Promotion of Sciences. References Giman, B., and A. Jukie. 2012. Distribution of Sunda Stink-badger Mydaus javanensis in Sarawak,  Malaysia. Small Carnivore Conservation 46:12-16. Hon, J. 2013 Importance of salt licks and roles of production forests for the conservation of wildlife  in central Sarawak, Malaysian Borneo. PhD Dissertation, Kyoto University, Japan Hon, J. 2011. A new record for the Borneo bay cat in central Sarawak, Malaysian Borneo. Cat News  55:4-6. Hon, J., and S. Shibata. 2013. Temporal Partitioning by Animals Visiting Salt Licks.  International Journal of Environmental Science and Development:44-48. Myers, S. 2009. A field guide to the birds of Borneo. Talisman Publishing, Singapore. Payne, J., C. M. Francis, and K. Phillips. 2005. A Field Guide to the Mammals of Borneo.  The Sabah Society, Kota Kinabalu. Phillipps, Q. and K. Phillipps. 2009. Phillipps’ Field Guide to the Birds of Borneo.  Beaufoy Books, Oxford. Samejima, H., P. Lagan, and K. Kitayama. 2012. Impacts of two different forest management  practices on the abundance of mammals. Pages 89-111 in K. Kitayama, editor. Co-benefits of  sustainable forestry-Ecological studies of a certified Bornean rain forest. Springer. Samejima, H. and Semiadi G. 2012. First record of Hose’s Civet Diplogale hosei from Indonesia,  and records of other small carnivores in the Schwaner Mountains, Central Kalimantan.  Small Carnivore Conservation. 46: 1-7 Notes 1: Formerly Graduate School of Global Environmental Studies, Kyoto University. Current employment is WWF Malaysia. 2:These information of ASDU is mostly based on the homepage of Anap-Muput FMU, http://www.anapmuputfmu.com/introduction.php 3:R is a free software, can be downloaded from http://www.r-project.org/.