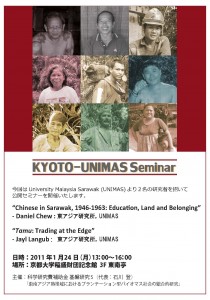 Two researchers from the Institute for East Asian Studies, University of Malaysia Sarawak visited Kyoto University and gave lectures in the “UNIMAS-Kyoto Seminar.”  Dr. Daniel Chew is an eminent historian in Sarawak, who focused on Chinese identity during colonial times. Mr. Jayl Langub, an anthropologist, has an intimate knowledge of indigenous peoples in Sarawak. He talked about the relationships between nomadic hunter-gatherers and longhouse residents through a traditional trading system.  We found that the interests of both speakers are closely related to the focus of our research project, and anticipate working together to accelerate the research in Kemena and Jelalong regions. The titles and abstracts of the lectures are as follows. (written by Ryoji Soda) ”Chinese in Sarawak, 1946-1963: Education, Land and Belonging”  by Daniel Chew  (The topic) is on Chinese identity formation in Sarawak during the period of British colonial rule from 1946 to 1963, on how the ethnic Chinese perceived their identity in response to political circumstances and socio-cultural factors.  Extraneous factors such as the historical and cultural identity of the Chinese, how China viewed its role in relation to the Chinese overseas, the attitudes and policies of the British colonial government, and the reactions of the indigenous people of Sarawak towards the Chinese, shaped the self perceptions of the Chinese and their sense of belonging to Sarawak. In particular, Chinese education and the demand for land for planting will be examined for their influence on Chinese identity. 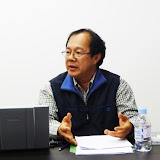 ”Tamu: Trading at the Edge” by Jayl Langub  At the turn of the 20th century, the Brooke government in Sarawak instituted a system of government-supervised trade meetings known as tamu between the nomadic Penan and longhouse-dwelling swidden agriculturalists. This system of trade involved three parties: the Penan, their longhouse neighbours and the government acting as a mediator to ensure fair dealings.  It is a unique system in that it combined governance and fair economic exchange between stronger and weaker groups. The institution is significant in that it revealed much about the Brookes’ philosophy and governance towards small and isolated groups such as the Penan. The system is no longer practiced but is still remembered with nostalgia by the Penan, primarily for being respectful and fair to all parties. 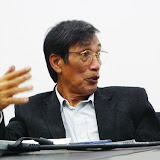 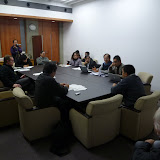