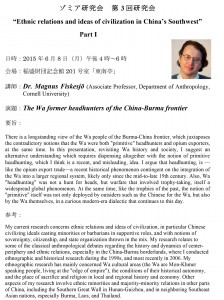 発表要旨：
There is a longstanding view of the Wa people of the Burma-China frontier, which juxtaposes
the contradictory notions that the Wa were both “primitive” headhunters and opium exporters,
at the same time. In this presentation, revisiting Wa history and society, I suggest an
alternative understanding which requires dispensing altogether with the notion of primitive
headhunting, which I think is a recent, and misleading, idea. I argue that headhunting, is ―
like the opium export trade―a recent historical phenomenon contingent on the integration of
the Wa into a larger regional system, likely only since the mid-to-late 19th century. Also, Wa
“headhunting” was not a hunt for heads, but warfare that involved trophy-taking, itself a
widespread global phenomenon. At the same time, like the trophies of the past, the notion of
“primitive” itself was not only deployed by outsiders such as the Chinese for the Wa, but also
by the Wa themselves, in a curious modern-era dialectic that continues to this day.

参 考：
My current research concerns ethnic relations and ideas of civilization, in particular Chinese
civilizing ideals casting minorities or barbarians in supportive roles, and with notions of
sovereignty, citizenship, and state organization thrown in the mix. My research relates to
some of the classical anthropological debates regarding the history and dynamics of center-
periphery and ethnic relations, especially in the China-Burma borderlands, where I conducted
ethnographic and historical research during the 1990s, and most recently in 2006. My
ethnographic research has mainly concerned Wa cultural areas (the Wa are Mon-Khmer
speaking people, living at the “edge of empire”), the conditions of their historical autonomy,
and the place of sacrifice and religion in local and regional history and economy. Other
aspects of my research involve ethnic minorities and majority-minority relations in other parts
of China, including the Southern Great Wall in Hunan-Guizhou, and in neighboring Southeast
Asian nations, especially Burma, Laos, and Thailand.