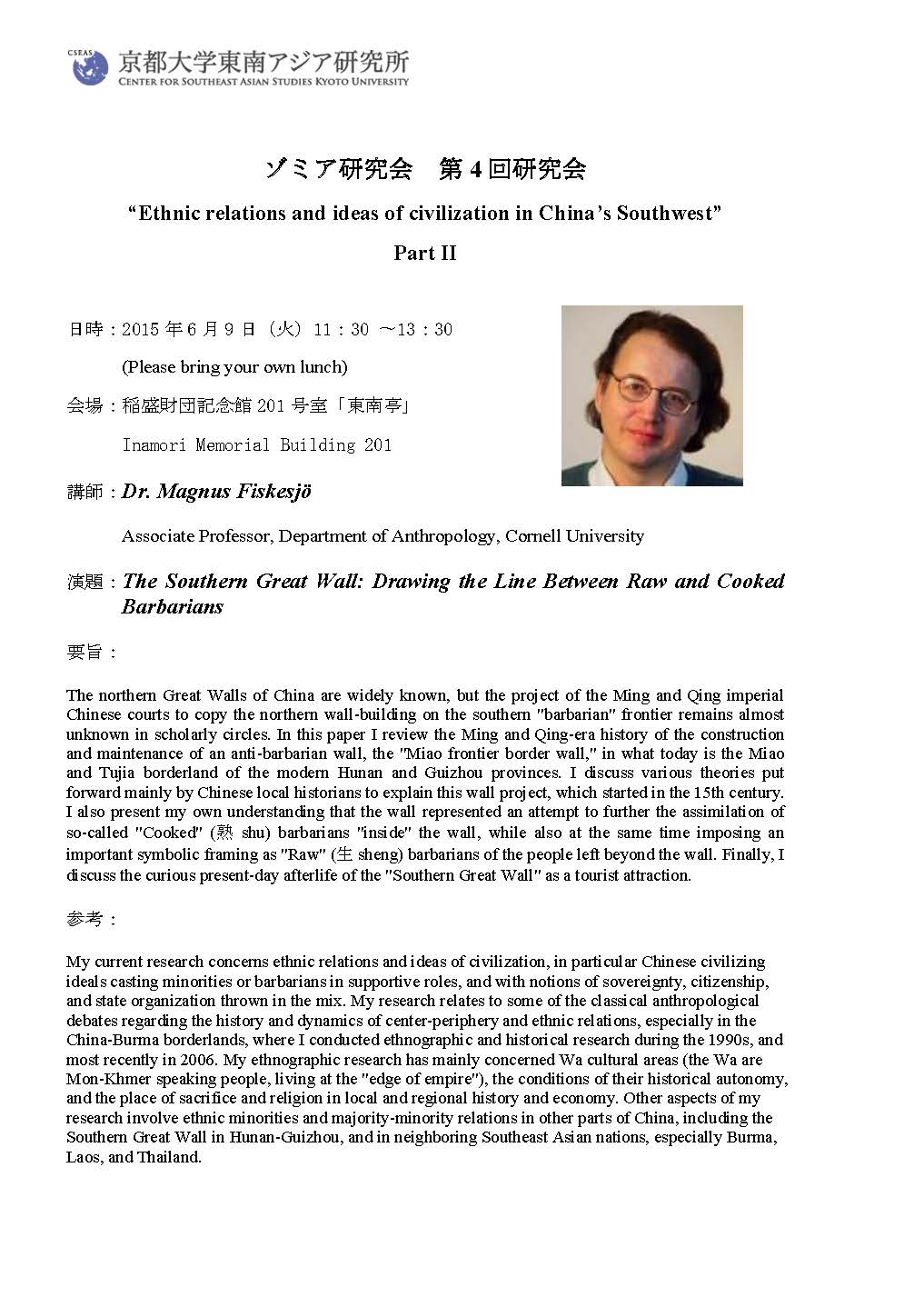 発表要旨：
The northern Great Walls of China are widely known, but the project of the Ming and Qing
imperial Chinese courts to copy the northern wall-building on the southern “barbarian”
frontier remains almost unknown in scholarly circles. In this paper I review the Ming and
Qing-era history of the construction and maintenance of an anti-barbarian wall, the “Miao
frontier border wall,” in what today is the Miao and Tujia borderland of the modern Hunan
and Guizhou provinces. I discuss various theories put forward mainly by Chinese local
historians to explain this wall project, which started in the 15th century. I also present my
own understanding that the wall represented an attempt to further the assimilation of so-called
“Cooked” (熟 shu) barbarians “inside” the wall, while also at the same time imposing an
important symbolic framing as “Raw” (生 sheng) barbarians of the people left beyond the
wall. Finally, I discuss the curious present-day afterlife of the “Southern Great Wall” as a
tourist attraction.

参 考：
My current research concerns ethnic relations and ideas of civilization, in particular Chinese
civilizing ideals casting minorities or barbarians in supportive roles, and with notions of
sovereignty, citizenship, and state organization thrown in the mix. My research relates to
some of the classical anthropological debates regarding the history and dynamics of centerperiphery
and ethnic relations, especially in the China-Burma borderlands, where I conducted
ethnographic and historical research during the 1990s, and most recently in 2006. My
ethnographic research has mainly concerned Wa cultural areas (the Wa are Mon-Khmer
speaking people, living at the “edge of empire”), the conditions of their historical autonomy,
and the place of sacrifice and religion in local and regional history and economy. Other
aspects of my research involve ethnic minorities and majority-minority relations in other parts
of China, including the Southern Great Wall in Hunan-Guizhou, and in neighboring Southeast
Asian nations, especially Burma, Laos, and Thailand.