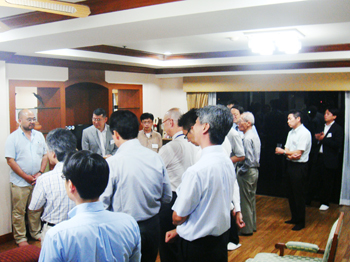 The opening ceremony of Bangkok New Residence in February, 2012

The Bangkok Liaison Office was established in 1964, and its present location is in the Sukhumvit area in central Bangkok. The office has now expanded from its original base of Thai studies to the broader Mainland Southeast Asian studies, reflecting the shift of research interests of CSEAS staff and scholars’ community. The office has been managed by researchers that are selected from CSEAS staff as well as from other faculties, institutions and universities in Japan. The office functions as a residence for researchers and their families stationed there. It was originally established as a research lodgings for Japanese researchers in Thailand, but it performs a variety of functions today.

The office has three major functions. First, it is a base for information collection. Very important parts of the major collections of CSEAS, such as books in vernacular languages, statistics, documents, and maps have been collected by researchers at the office. It maintains regular contact for exchanging academic information with Thai research agencies like the National Research Council of Thailand, Chulalongkorn University, Thammasat University, Kasetsart University, Chiang Mai University, Khon Kaen University, and Maha Sarakham University and so on. The office also serves as a channel for various inquiries about local institutes from Japanese and other researchers and students.

Furthermore, it operates as a publicity and networking hub and researchers stationed there often organize workshops, seminars and hold receptions for scholars in Thailand and other regions in mainland Southeast Asia. In recent years, the office has been used for assisting various kinds of publicity activities of CSEAS as well as Kyoto University. These publicity activities based in the office definitely contribute to promote the credentials of Southeast Area Studies of CSEAS.

Finally, the office provides continual logistic support to field surveys including helping in negotiation with research counterparts in Thailand and attending to emergency measures. It is also a temporary storehouse of research document and equipment. Visitors can also use the rooms, internet service, and other facilities of the office for business meetings, preliminary discussions and analysis of data.

Estimated Time of Travel About 1 hour