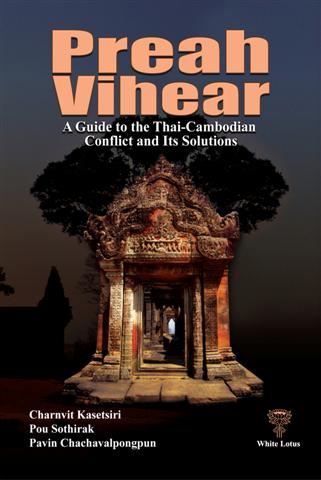 Preah Vihear: A Guide to Thai-Cambodian Conflict and Its Solutions

Why does the old wound between Thailand and Cambodia since 1962 reopen again in the 2000s? This time it is potentially more dangerous than half a century earlier. This book offers not only the explanations of the conflict — from the legacies of the colonial era to the political situations that led to recent deadly clashes — but also the possible solution to this sensitive issue and how to get there. Cooperatively written with clarity by Thai and Cambodian scholars – a historian, a veteran diplomat, and a scholar of international politics of Southeast Asia – it is a good reading for both the distant observers of the region and the experts.

Thongchai Winichakul, University of Wisconsin-Madison
This wonderful and timely book, written by Siamese and Khmer scholars of the highest calibre, lays bare the ahistorical narratives that modern-era Siamese and Khmer nationalist politicians have repeatedly used to provoke unnecessary and destructive conflict in an effort to pursue their domestic power interests via a distorting effort to construct visions of Thai and Cambodian nations serving those interests. Emphasizing that alongside the history of wars conducted by courts and conflicts stoked up by modern politicians operating in Bangkok and Phnom Penh there is another history of creative and fruitful social and cultural interaction, the authors place the recent resurrection of the Preah Vihear temple territorial dispute squarely in the context of contemporary domestic political struggles in Thailand and Cambodia. They rightly locate the main motor of the dispute in the profound and sometimes bloody socio-political crisis gripping Thailand, but also point to the way in which Cambodia’s would-be forever Prime Minister Hun Sen has exploited the provocation to help him realize that ambition. They also outline how the dispute can and should be solved peacefully and reasonably through various diplomatic and other means. This is a must-read for everyone concerned about the future of Thailand and Cambodia.