We are happy to announce that this year’s seminar in Indonesia will be partly sponsored by the JSPS Asian Core Program, Global COE and LIPI-ICIAR project. We hope that this will be the start of fruitful academic exchange among young scholars in Indonesia, Japan and countries in East and Southeast Asia. The seminar is free of charge and open to the public. Lectures will be conducted in English.

The Southeast Asia Seminar, which has been held each summer since 1976, offers four days of intensive lectures that provide a survey of the nature, culture, society, economy, and other aspects of the region and the basic knowledge needed to understand the concept of area studies.

Details of this Year’s Seminar 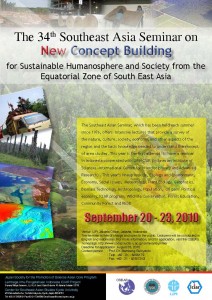 The 21st century will be the century of tropics. Renewable Energy including Solar Radiation and Biomass in tropics will be fundamental resources for the global population and economies. Aiming to realize a Low Carbon Society, the technology developments are accelerating . At the same time, competition for renewable resource will also accelerate.

The equatorial zone of South East Asia over Indonesia is the most active region of heat and water cycle all over the world. This is especially the case for the many islands of Indonesia and their shallow surrounding seas which provide a large scale environment that is neither purely oceanic nor terrestrial, and has been termed the Maritime Continent. The Maritime Continent is the most suitable area for renewable energy production. The expansions of palm oil and artificial forest plantation in Indonesia are the indications of new competitions for resources.

The tropical forests of Indonesia represent one of the most biologically diverse regions on Earth, as well as a significant terrestrial reservoir for atmospheric carbon. Since 1990, about 24% of the total forest and 31% of the primary forest has been cleared, and plantation area has increased from 2.2 million to 3.4 million hectares over a 15 year period (data is derived from the FAO). Large scale land use and land cover changes could lead to irreversible changes on natural environment.

From the points of view of biomass productivity and sustainability, the development process of natural environment and local society are discussed in the equatorial zone of South East Asia, especially Indonesia. And the possibility of the development of Indonesian society as a sensible major country for its natural resources is discussed. Based on the global changeovers of resource and energy and economics, we will try to build a new concept for sustainable humanosphere and society from the equatorial zone of South East Asia.

On the first day, lecturers and participants explain contemporary issues in Indonesia to share our knowledge. Second day, we re-realize the characteristics of natural system in Indonesia to find new direction of natural resources utilization. Third day, we try to propose new concepts for sustainable humanosphere and society. Last day, we discuss the new scheme to connect research and local activities.