Center for Southeast Asian Studies, Kyoto University > Research > IPCR : Joint Research and Publication > Memories and Discourse in Search of Justice —An Analysis of the Conflict over Acts of the Japanese Military during WW II in Asia

A man who worked for the Japanese military post during the war in South Sulawes points where a “comfort station” was located.

In the research team’s previous project, “War memories in Southeast Asia and the rebuilding of relations over post-war reconciliation” (FY 2012-2013) we conducted interviews with survivors and witnesses of the “comfort women” system during the Second World War, about the past and their current situation in Sulawesi, Indonesia, and gathered related Japanese materials. Based on these materials, the current research makes an attempt to describe the idea of “justice” that these survivors and their communities came to embrace and to clarify how and why that concept of “justice” and the often-heard Japanese discourse, especially the discourse and logic that deny “the issue of confort women”, don’t mesh with each other. 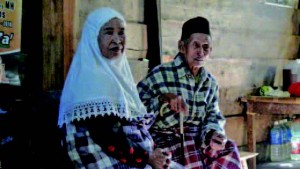 Ms. Becce (left) was taken from her home and was made a sexual slave. Her cousin (right) says he couldn’t do anything and sheds tears. Ms. Becce was expelled from her family and lived as a maid. Now she lives with the family of her cousin.

The research analyzes the idea of “justice” embraced by the victims and communities that experienced the Japanese military’s war-time atrocities in a historical and social context in order to grasp what should be understood of the demands of these people in a holistic fashion. The reason to justify this approach comes from our conclusion in the previous research that the “damage” they suffered should be more properly understood as a holistic concept that covers a wide range of experience from violence to the impact at a later stage in their lives. The survivors demand justice not just for what happened during the war, and they want to say that not just to Japanese soldiers. The research also poses a question of whether or not the diametrically opposed discourses, one that demands justice and the other that denies the issue, is essentially impossible.

The significance of the research will (1) establishing facts about cases in Sulawesi, Indonesia, which have not been surveyed so far, and (2) describing the general picture of “consciousness” about damage based on interviews. The research will also make a constructivist analysis to the epistemological world of the discourse of denial as one that does not see this wholeness.

Expected results of the research are as follows. It will contribute to the on-going debate by adding a new case from Sulawesi, Indonesia, in which the Japanese military, a Japanese company and the local community were intertwined. It will also bring a new argument to the on-going debate by clarifying the fact that unless the conflict of perception is not reconciled at a level different from the level of acknowledgement of facts it will be difficult to overcome the gap of conflicting discourses.