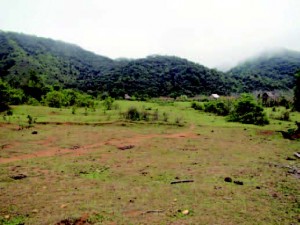 The former site of the village which moved to Vientiane province.

This research reconsiders the formation of Southeast Asian society by regarding the inland Southeast Asia as a ‘war affected society’, where livelihood and environment had been damaged and transformed by the Indochina war and the Vietnam war. In addition, this research explains local people’s resilience by studying how they overcame the risks and difficulties caused by the wars, and also by investigating the new networks and livelihood they rebuilt after the war. 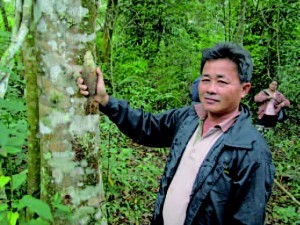 There still are unexploded shells around the site.

The purpose of this research is to reconsider the formation of inland Southeast Asia from the viewpoint of the influence of war and local people’s resilience.

Firstly, this research reconsiders the features of the formation of inland Southeast Asian from the viewpoint of the influence of wars.
Previous studies in the region have focused on the issues of a transition from natural economy to market economy. Modern wars (the Indochina war and the Vietnam war) in 1960s and 1970s, however, led to the resettlement of peoples living in mountainous areas, and changed the livelihoods and environment in the region. Moreover, the networks with families who were exiled to foreign countries created new livelihoods for local peoples. Thus, it seems that wars heavily affected social change of Southeast Asia.

Secondly, this research analyzes people’s resilience against risks and disasters, and the conditions of their success through an investigation into the livelihood changes of people who were resettled during the war. After leaving their home villages, they have struggled for survival in new places; through getting assistance from government; reclaiming new lands; collecting non-timber forestry products; cooperating with neighboring villages; and using family networks. Their experiences will show us the lessons on how to develop care for people who are resettled by developemnt projects and natural disasters.

The expected results of this research will be to illuminate the specific characteristics of inland Southeast Asia, as well as to offer suggestions to develop care for people who are affected by risks that arise from disasters and resettlements.